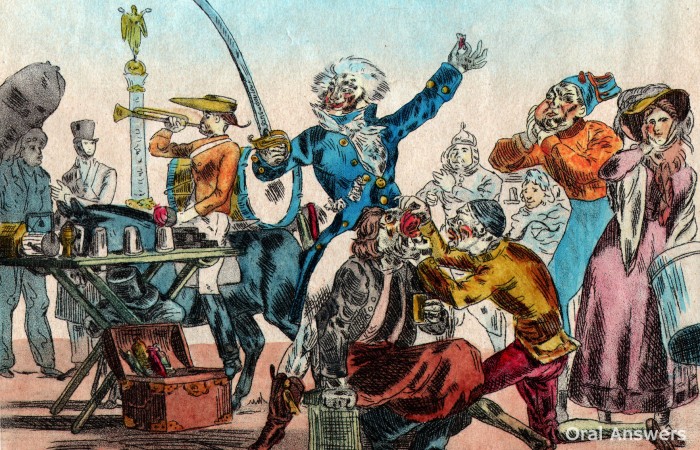 Imagine living in a remote village 300 years ago.  After suffering with a toothache for weeks, you see an advertisement about a traveling dentist who will be performing in the village square next weekend.  You feel relieved, but somewhat nervous.

Who were these dentists that traveled around the countryside putting on loud, raucous shows whereever they went?

They were known simply as tooth drawers (pronounced draw-ers). 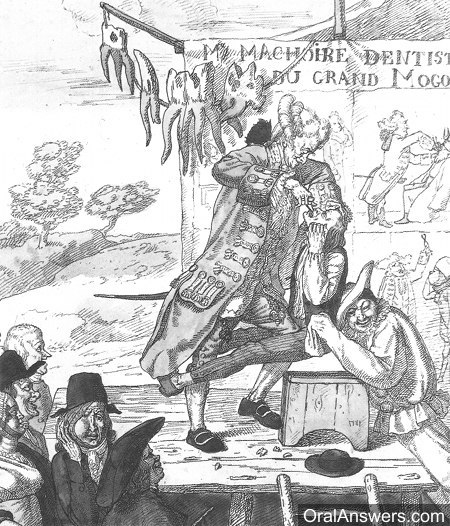 Many people had to be in extreme pain before they would dare go to a tooth drawer.  Tooth drawers ended up getting a bad reputation because many of them weren’t very good dentists and simply craved fame and attention.  Also, as you can see in the picture above, someone was picking the pocket of the tooth drawer’s patient.

On stage, they would act like they were great dental surgeons, but they often did this by tricking their audience.

How The Tooth Drawer Would Trick the Audience

After calling the actor up, the tooth drawer would pretend to extract the painful tooth and the patient would then cough out a bloody tooth.  In reality, the tooth drawer would give his actor an extracted tooth with blood on it and tell him to cough it out.  The actor would then exclaim, “I didn’t feel a thing – Thank you for taking me out of pain!”

After the tooth drawer finished with his actor, he would call another toothache sufferer up.  Those who really had a toothache would scream in agony at the tooth drawer’s rough methods.  Unfortunately, by this point, the crowd would be so loud and rowdy that nobody noticed how much suffering the tooth drawer was causing.

Was Every Tooth Drawer Dishonest?

Not every tooth drawer was dishonest.  There were some that truly wanted to help people get out of pain.  The problem was that way back then, nobody knew about local anesthesia.  Nobody knew that teeth could be saved by doing root canals.  The main problem was that there was simply a lack of scientific knowledge in the field of dentistry.

In her book Tooth Worms & Spider Juice, Loretta Ichord states, “Even the honest tooth drawers had limited skills and were capable of tearing large pieces of bone off with a tooth, breaking jaws, and causing facial deformities.”

If you take anything away from this article, I hope that you’ll realize that dentists aren’t as scary as they used to be.  With modern technology, your visit to the dentist no longer has to be painful or dangerous.  And by the way, with the HIPAA privacy act as one of your dental patient rights, you no longer have to worry about dozens of spectators coming to watch you during your dental visit like in the picture below.  Thanks for reading! 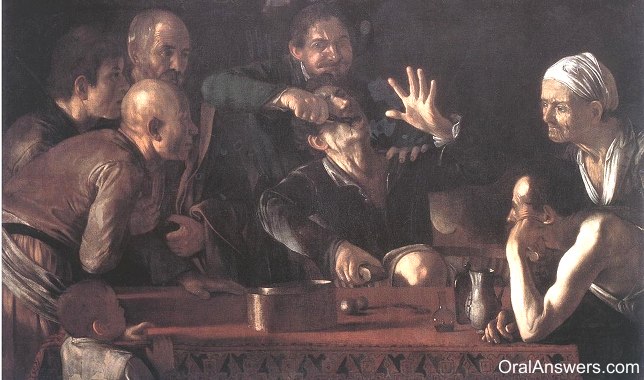 5 Reasons to Be Thankful for Your Teeth