When you get a dental injection, your body wonders why on earth you’re allowing a sharp metal object to penetrate your gums!  It quickly tries to repair the damage by increasing blood flow to the area so it can carry away the anesthetic, which it views as a foreign substance. As you might have guessed, if your body’s protective response tries to get rid of all of the anesthetic, it’s not going to last very long. 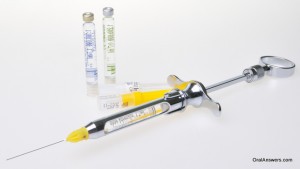 This was a big problem with anesthetics back over 100 years ago.  Then, something exciting (to dentists anyway) happened!  A guy named Abel discovered adrenalin (a more common name for epinephrine) in 1897.   In 1903 Braun suggested using adrenalin as a “chemical tourniquet” to make anesthetics last for a longer period of time.

This Braun fellow recommended using epinephrine at the very small concentration of 1 part to 10,000.  That may seem weak, but we’ve found that even diluting it to 1 part to 200,000 still retains the beneficial effects of epinephrine while minimizing the side effects.

Epinephrine is what is known as a vasoconstrictor, which is just a fancy word for something that causes your blood vessels to constrict, or get smaller.

Why Dental Anesthetic Has Epinephrine

It is this vasoconstrictor effect of epinephrine that makes it so useful in dental anesthetic.  By constricting your blood vessels, it benefits you and your dentist in the following three ways.

1 – The anesthetic gets absorbed more slowly into your body because blood flow to the injection site is decreased.  Since blood levels of the local anesthetic are decreased, the risk of having an “overdose” of the dental anesthetic is minimized.

2 – Since there is less blood flow, the dental anesthetic stays put right around the nerve for a much longer time, allowing it to work for a longer period of time than it would without epinephrine.  This means that you stay comfortable throughout the entire procedure.  It also means that you might be numb for a few hours after leaving the dentist – a sometimes unwanted and embarrassing side effect!

3 – Minimizes bleeding where the anesthetic was administered.  This is great if the dentist is performing a more involved surgical procedure involving the gum tissue since it makes it much easier to see what we’re doing if there’s hardly any bleeding.

If you have any questions about dental anesthetic and epinephrine, feel free to leave a comment below.  Thanks for reading!

Cleaning Your Tongue Can Get Rid of Bad Breath