Home Oral Health & Hygiene Will You Still Have Your Teeth When You Get Old?

A couple of weeks ago, Karen, a reader from Colorado Springs emailed me with the following question: 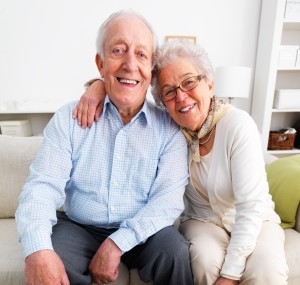 “Since our average life expectancy is getting longer, what’s the likelihood we’ll have any of our original teeth if we were born in the 50’s before better dental care was available. Do our children have a better chance of maintaining their teeth into their later years?”

Over the past few decades, the number of people keeping their natural teeth has steadily increased.

In fact, a researcher by the name of Hugoson did a study in Sweden spanning 40 years.  It showed that over time, people are keeping their teeth much longer, and dentists are providing higher quality fillings than they have in the past.  I’ll recap some of that study’s most interesting findings later in this article.

Karen is right, better dental care is much more widely available now than it was in the past.  Many factors have contributed to this improvement of oral health, some of which are still being studied. 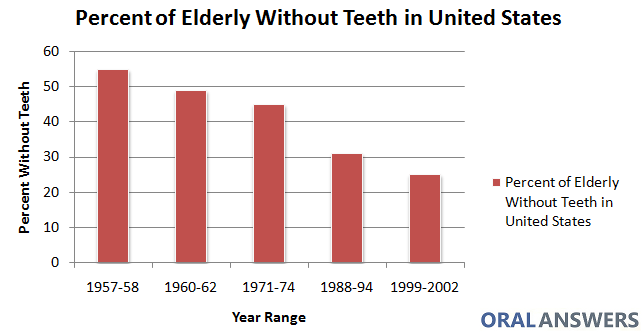 As you can see, about 50 years ago, over half of the U.S. elderly population were missing all of their teeth.  Recently, that number has dropped below one quarter of all U.S. elderly adults.

Americans of All Age Groups Are Keeping Their Teeth Longer

The graph below shows the number of teeth that people in different age groups had circa 1990 and 2000.  I made it using the data from this study.

For the purposes of this study, a full set of teeth is defined as 28 teeth.  This does not include the wisdom teeth, since they are often extracted. 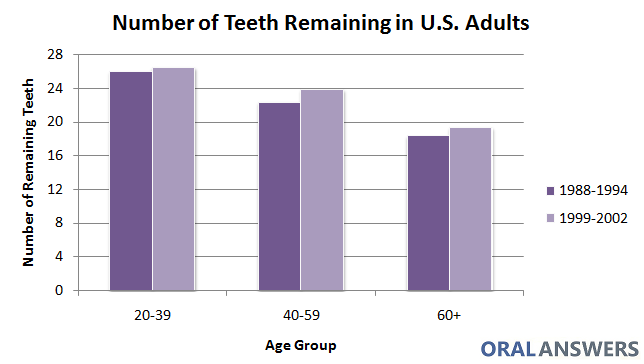 Between 1990 and 2000, the number of natural teeth that adults across all age groups had noticeably increased.

As mentioned above, one of the most in-depth studies on the subject of age and oral health was done over the course of 30 years in Jönköping, Sweden.  Researchers measured the oral health of Swedes of all ages (from 3 to 80.)  Here are some of their most important conclusions:

Gum disease is the main cause of tooth loss.  I found it interesting that the gum health of those who were 60 years old in 2003 was equivalent to a 40 year old’s gum health in 1973.  This trend helps to explain why more and more elderly people are keeping their natural teeth.

Oral health is improving.  It could be because of the increased availability of fluoride, better oral hygiene, higher quality dental care, or a combination of many factors.

Returning to Karen’s original question, the evidence shows that we are not doomed to lose our natural teeth when we get older.  Keep in mind that those who are elderly now grew up before the 1950’s and they are keeping their teeth longer.  In fact, the chances are better than ever that with proper oral care, you can keep your natural teeth for a lifetime!

Do you have any questions or comments on oral health and aging?  Please leave them in the comments below.  If you liked this article, share it with a friend!

Why Don’t You Go to the Dentist?

Why Is The Water Fluoridation Debate So One-Sided?