How water got to be fluoridated in a majority of the United States is an interesting story.  It all started over 100 years ago with a recent dental graduate in Colorado Springs, Colarado.

Upon graduating from dental school at the University of Pennsylvania, Frederick McKay moved to Colorado Springs, Colorado to practice dentistry in 1901.

He was immediately troubled by an interesting phenomenon — a lot of his patients had teeth with unsightly brown stains and pits.  In fact, he found that over 80% of the people in Colorado Springs had a defect with their enamel.

In 1905, McKay moved to St. Louis for three years.  He didn’t see one case of stained teeth there.  Upon returning to Colorado, he suspected that there was an environmental factor in play.  He had the drinking water tested in areas with the brown stain, but nothing turned up.

Frederick was puzzled.  He had no idea what was causing the brown teeth, but his curiosity led him to continue to search for an answer.

Frederick McKay Gets Some Publicity

Frederick Mckay noticed that the brown stains occurred without regard to sex, race, or the amount of money people had.  He also noticed that it was isolated to whole communities throughout the United States. 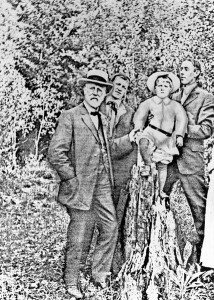 A prominent dentist caught wind of McKay’s observations and came out to Colorado to write about them.  They even took a picture of themselves analyzing the teeth of a young Coloradan boy.  As you can see in the picture to the right, everybody seems to be thoroughly enjoying themselves!

As stated above, McKay suspected the culprit was something in the water, but since his initial tests didn’t turn up any significant clues, he was still without answers.  As a result, other theories as to the origin of the brown stains began to develop.  Some of the theories included a nutritional deficiency, too much iron, radiation exposure, and genetics.  One researcher even found an association between freckles and stained teeth.

Something In the Water

McKay could not let go of his suspicions that the water was the source of the brown stains.  The small town of Oakley, Idaho was one of the many towns that had an epidemic of brown stained teeth.  However, people living on the outskirts of Oakley who drank from a spring (a different water source than the rest of Oakley) had beautiful, pearly-white teeth without any of the brown staining.

McKay persuaded the town to change its water supply to the spring water.  To make a long story short, when McKay returned years later, he found that the children who had been born after the water supply switch had beautiful teeth that were  free from brown stains and pits!

To see before and after pictures of Oakley, Idaho children and for more information, read this article published in 1939 (PDF).

Naturally Fluoridated Water is Found All Over the World

Right about now, you’re probably wondering what this has to do with teeth.  Don’t worry, that’s what we will discuss next!

Along with the brown staining, McKay also made other observations about the teeth of the people affected by the staining.

In 1916 McKay said, “Contrary to what may be expected [the brown staining] does not seem to increase the susceptibility of the teeth to decay.”

Then in 1925 McKay asked the question, “How do we explain the comparatively high immunity to decay of mottled enamel when its structural elements lie wrecked and disorganized?”

Finally, in 1928 McKay proclaimed that mottled teeth exhibit “a singular absence of decay.”  In other words, there were no cavities in the people with stained teeth.

People started thinking that if mottled teeth exhibit greater resistance to cavities, maybe if we got a small enough dose of whatever was in the water, it could protect us from cavities without making our teeth look too ugly.

After a lot of testing and numerous studies, it was eventually discovered that the fluoride in the water was what caused the brown, ugly teeth and also the resistance to cavities.

What Is the Optimal Fluoride Concentration In Water?

Throughout the 1930’s, researchers set out to find the “optimal fluoride concentration” in water that would both reduce the amount of cavities and minimize the cosmetic effects of enamel fluorosis.

A man by the name of H. Trendley Dean came up with a scale to record the severity of fluorosis.  After weighing the cons of fluorosis versus the pros of teeth more resistant to decay, the “optimal fluoride concentration” was deemed to be 1 ppm (part per million) of fluoride.

Curious about how much 1 PPM of fluoride really is?  Read the article How Much Fluoride is in a PPM?

The Idea to Add Fluoride to Water Supplies

Gerald J. Cox is the man who usually gets the credit for suggesting water fluoridation as a public health measure.  He was a biochemist from the University of Pittsburgh School of Dental Medicine.  In a published article, he stated that adding fluoride to the water supply would be the “most practical means of approaching the goal of sound teeth for all children.”

He also thought that adding fluoride to the water  should be less controversial than adding chloride to sanitize water.  Judging by the polarized fluoride debate that rages on today, I think it’s safe to say that he was wrong regarding that second assumption!

In January of 1945, fluoride was added to a public water supply in Grand Rapids for the first time.  The initial trials showed an improvement in oral health.  After that, cities across the nation were clamoring to get fluoride in their water supplies.

Since then, the number of people receiving artificially fluoridated water has steadily increased.  As of 2008, nearly 200 million United States citizens were receiving fluoridated water.  Here’s a map that shows the increase in water fluoridation between 1992 and 2006.

To read a much more detailed history of water fluoridation, check out the book The Fluoride Wars.  It is the most balanced book I’ve read yet on the topic; although you wouldn’t think it’s balanced by reading the reviews from the many anti-fluoridationists!

What do you think about water fluoridation?  Let us all know by leaving a comment below.  Thanks for reading!

Don’t Let Your Teeth Get Hurt This Cold & Flu Season

Do You Have Dental Fear or Dentist Phobia? You’re Not Alone!