Home Pediatric Dentistry Does Teething Cause a Fever in Teething Babies?

There are so many symptoms that are attributed to teething that many parents think that they’re child is almost always teething!  Traditionally, “academic research” has found that teething doesn’t really cause a fever, while many parents and caregivers that are actually taking care of teething babies report that they definitely do get fevers during teething.

Where does the truth lie?  Do teething babies really get fevers?  I decided to find out.

Does Teething Cause a Fever? 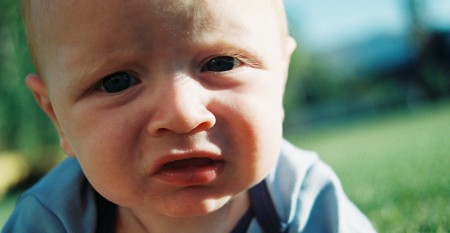 This is a tricky question and in order to answer it, we need to define exactly what a fever is.  If we define a fever as a temperature above 102º, then the answer is usually pretty clear that teething does not cause a major fever over 102 degrees.

But, when we define a fever as a smaller temperature rise, say a temperature of 100º for example, the answer is not so clear-cut.

From the data presented here it would seem that the ‘granny’s tale’ that infants cut their teeth with fever is supported. We would like to stress the danger in attributing fever to teething without ruling out other pathology. Children are teething from about 6 months to 6 years and therefore can easily be found to be teething when ill from other causes. Only the eruption of the first tooth is a clear landmark and so this study limited itself to the period before its emergence. We are intrigued by our finding and have no explanation to offer at this stage for the observation.

We were taught as students to listen to parents; grandma seems also to have had something to tell us.

From the two studies above, it may appear that teething does cause a mild fever in some children.

The last study I would like to share followed 90 different tooth eruptions. They analyzed the data in many different ways, but in the end they couldn’t find an association between fevers and teething:

A possible association between teething and fever was investigated in several ways…A graph of mean z score temperatures for the 28 days either side of an eruption day showed no trends toward raised or rising temperature near eruption days. Two separate logistic regression analyses adjusting for age were performed to examine possible associations between toothday status and fever. In the first, high fever was compared with no fever, whereas in the second low fever score was compared with no fever.  Neither analysis indicated a relationship between tooth eruption and fever.

The last study failed to find any association between fevers and teething.

Conclusion – Does Teething Cause Fevers?

The few studies that we do have on this subject give us mixed answers.  There are a few things that we can say for sure:

1 – Children get lots of fevers.  It could be that the fevers that they get around the time that they are teething are simply by coincidence.

2 – If your child is sick while teething, don’t just assume that it is due to the teething.  It’s always best to get a definitive answer from a doctor.

3 – Teething doesn’t cause fevers, but some teething babies may experience a slight rise in temperature around the time when they are teething.

I hope that answers some of your questions about teething and fevers.  If you have any questions, comments, or teething stories to share, feel free to leave them below in the comments section.  Thanks for reading!

Can a Dentist Who’s Not An Orthodontist Offer Braces?