Did you know that 5,016 children died from teething in just one year in Wales and England? The year was 1839. Since many babies died around the age of teething, most people simply assumed that it was the teething that killed them. Luckily we’ve come a long way since then — we now know that babies don’t die from teething!

Teething can be a very painful process for your little loved one.  Often, as parents it is easier for us to focus on how our infant’s teething affects us, such as disrupting our sleep, interrupting a peaceful day, or getting in the way of things we want to get done.

It is important to understand what your child is going through.  Try to imagine what it would feel like if there were tiny knives under your gums pushing their way into your mouth – it probably would be kind of painful and irritating.  It’s that irritability that kicks off our list of 10 signs of a teething baby.

10 Signs & Symptoms of a Teething Baby 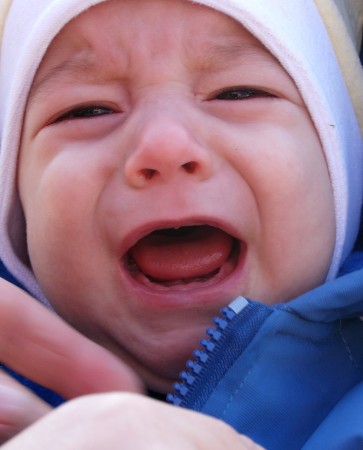 1 – Irritability and pain were reported by parents in this survey to be the most common symptoms of their teething babies.

2 – Waking up in the middle of the night and not sleeping well is another very common symptom that my wife and I experienced most with our little girl.  Our son really didn’t seem to have very much trouble with teething other than when he got his first tooth.

3 – Not wanting to eat solid foods is an understandable symptom of teething because their gums hurt so bad that the thought of chewing on some food probably doesn’t sound too good.

4 – Biting things.  You may notice that your child seems to want to bite a lot of things.  Our kids would never bite the teething toys that we got them.  Interestingly enough, the very expensive crib from Babies ‘R Us that my wife just had to get now has lots of bite marks on the top railing, a permanent reminder of the times when our kids were teething!  Our daughter would also often remove the pen from my shirt pocket and start biting it.

5 – Increased salivary flow and drooling.  You may notice that your child starts producing more saliva which causes them to drool more when they are teething.

6 – Rubbing their gums.  Babies will sometimes try to rub their gums to alleviate the pain.

7 – Ear rubbing was a common finding among teething babies.

8 – A mild fever has been found to occur during teething, but it’s important to keep in mind that major fevers are not associated with teething.  If your child has a really high fever, chances are that something else is causing it.

9 – A rash on their face – While a rash on your baby’s face can be a symptom of teething, rashes anywhere else on their body haven’t been found to be associated with teething.

10 – Sucking on things.  You might find your child sucking on their fingers more than before or sucking on random objects around the house that then become covered in drool!

Further reading: If you’d like to read more about teething, you can check out the book Paediatric Dentistry, read this study about real teething symptoms, or read this survey that parents answered about teething.

Will Your Teething Baby Have All of These Symptoms?

It’s almost certain that your baby will not have all of the symptoms mentioned above.  This study that appeared in the official journal of the American Academy of Pediatrics states that not one of the above symptoms was present in more than 35% of teething babies.

Most teething babies will get a few of the symptoms that are mentioned above, so you can use the teething symptoms above as a loose guideline to see if the symptoms your baby has are normal during teething.

What Symptoms Have You Noticed In Your Teething Baby?

While the ten symptoms above were shown to be associated with teething in a scientific paper, science is always changing as we learn and discover more.

Have you noticed any teething signs and symptoms in your baby that aren’t mentioned above?  Do you have any questions about teething?   I’d love to hear your comments and questions in the comments section below.  Thanks for reading!

Can You Get a Cavity Under a Dental Crown?

Five Reasons to Go to the Dentist This Year