Home Fluoride Are Your Pots and Pans Altering Fluoride Levels In Your Cooked Meals? 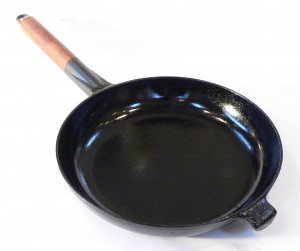 You may think that you never boil water.  However, many people use water for cooking.  If you’ve made macaroni & cheese or another pasta, rice, oatmeal, or mashed potatoes lately, then you’ve probably boiled water.

Back in 1975, some researchers had a question.  They wondered whether the type of container in which you cook food can have an effect on the fluoride content of what you eat.  You can read the complete study by clicking the following link (FYI – It is in PDF form so it may take a bit to load): Effect of cooking vessel composition on fluoride. By: Full, CA and Parkins, FM.

The Procedure of this Fluoride Study

The researchers analyzed a community’s water supply and found that it had 1 PPM of fluoride (click here to find out how much a PPM is)  They then took one pint (16 fluid ounces or two cups) of water and boiled it in one of four different containers.  They used an aluminum pot, a stainless steel pot, a Pyrex bowl, and a Teflon pot.  They turned the heat on high to obtain a rolling boil, and then reduced the heat “to maintain a moderate degree of boiling for 15 minutes.”  Next, they put the water in a clean bottle for storage and tested each sample to see how the boiling had affected the fluoride levels.  They even had a “control” bottle of water to ensure that their testing was accurate.

A Bar Graph of the Results

Here is a graph that I adapted from the paper showing the quantity of fluoride in PPM that was found in the water after boiling it for 15 minutes in the pot/pan made of that particular material.   If you’re not sure what a PPM of fluoride is, read this article to find out how much a PPM is.

Why Did Teflon and Aluminum Change the Fluoride Level of the Water?

As for the aluminum, the researchers guessed that the aluminum was reacting with the fluoride to form the compound Aluminum Fluoride.  Whether the compound stayed on the pan or formed in the water was not known.

I found this interesting that the type of metal our pots and pans are made of can affect the fluoride concentration in what we cook.  I am currently studying a lot about fluoride and water fluoridation.  I don’t think that the findings of this study really support or oppose water fluoridation, but it is interesting to know that we may be getting different amounts of fluoride from our water depending on what we do with it.

What do you think?  If you have any opinions, comments, or questions about fluoride levels in your water, please leave them in the comments section below.