Home Fillings and Inlays What Do Silver and White Fillings Look Like?

At my dental school, we recommend silver fillings for the back teeth since silver fillings last longer than white fillings.  However, many people are hesitant to get silver fillings because they stand out, and they don’t want other people to notice them.

If you are also wondering what the difference in appearance between white and silver fillings looks like, then this article is for you!

As you can see, silver fillings are noticeable.  However, during your everyday routine, people aren’t likely to see your back teeth.  Because of this, it is usually a good idea to get silver fillings on your back teeth because they are stronger and are more resistant to getting new cavities around them than the newer white fillings.

Another thing you may notice in the above picture is that this person’s lower front teeth are worn down.  You can learn more about the four ways we wear down our teeth here.

White fillings are matched to your tooth’s color by your dentist.  Thus they actually vary from white to gray to even yellowish shades.

As you can see below, the man has numerous white fillings on his back teeth (this is a view of his upper teeth from below). This picture is a good example of how picking the wrong shade of white can make a filling stand out even more.  Some of the fillings are easy to see because they are not matched very well to the shade of the tooth. 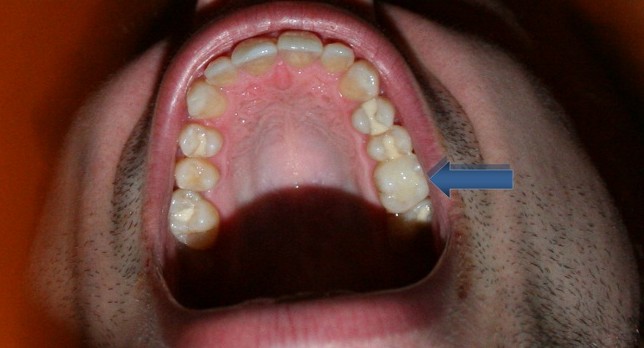 I have the arrow pointing at one of the more inconspicuous white fillings where the shade of filling material more closely resembles the tooth’s natural shade.  If you look closely you can see that in the middle of that tooth there is a big white filling.

As you can see, white fillings are definitely less noticeable than silver fillings.  They can be more noticeable if their shade doesn’t exactly match the shade of your tooth.

If you have any questions or comments about white or silver fillings, go ahead and write them below in the comments section.  Thanks for reading!

Why Your Tooth Is Sensitive After A Filling

25 Things That Make You More Likely To Get Cavities