Common sense dictates that it’s a good idea to wear a mouthguard if you play contact sports or engage in any activity where you could potentially damage your teeth.  However, we don’t always do what we know is in our best interest. 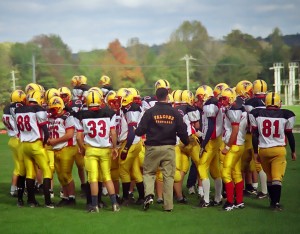 There are several reasons why people don’t wear mouthguards.  Sometimes people don’t know that the activity that they are engaging in requires a mouthguard.   Teenagers may not wear them because there is peer pressure to not wear one.  After all, nobody wants to be the only one on their team that wears a mouthguard!  Others might complain that a mouthguard is uncomfortable or interferes with their speech and breathing.

One of the most important functions of mouthguards are to keep your teeth from breaking.  If your tooth does fracture, it usually can be saved.  Here’s a few types of tooth fractures and their respective treatment:

If a baseball hits you hard right in the mouth and you’re not wearing a mouthguard, it could break your tooth.  If you’re more fortunate,  it may only displace your tooth and cause your tooth to move easily thereafter.

However, if you are wearing a mouthguard when an object hits your mouth, it will cushion your teeth.  A mouthguard can also distrubute the force over all of your teeth so that one tooth doesn’t receive a crushing blow.

3. Mouthguards Protect Against Knocking Out a Tooth

Nobody wants to have their tooth get knocked out.  It would be a tragedy if someone ended up with a large gap in their smile due to an accident that could have been prevented by wearing a mouthguard.

Today in class, my professor showed a picture of a basketball player who had bit right through her lower lip.  She needed stitches to repair the harm.  All of this could have been avoided if she had covered up the sharp surfaces of her teeth with a mouthguard.  Mouthguards can keep you from injuring your tongue and cheek as well.

There is some debate on this issue. Those who say that mouthguards can help prevent concussions rationalize that since there is padding between the mandible and the maxilla, then if you sustain a blow to the mandible, the padding could lessen the force of the mandible pushing up on the skull near the brain, which could cause a concussion.

An article in the Journal of Athletic training had this to say:

Although no controlled experimental study has confirmed or refuted the idea that a properly fitted mouthguard reduces the likelihood of sustaining a concussive injury, evidence is mounting that the device could play a significant role in this critical area of player safety.

On the contrary, some neurosurgeons have claimed that mouthguards don’t help in reducing the number of concussions.  Dr. Cantu, an expert on concussions has stated the following:

No study that mouth guards prevent concussions has been done.  But they do prevent injuries to the teeth so I would recommend all collision-sports players wear mouth guards.

Mouthguards also protect against jaw fractures.  When you sustain a blow to the head and your teeth contact each other, there’s not much room for flexibility.  But, if you have a layer of flexible plastic between your teeth, it can act as a padding and save your jaw from fracturing.  Jaw fractures often require major surgery (and a steady diet of Jello and soup), so it is likely in your best interest to wear a mouthguard to prevent such an occurrence!

Smokers Have Less Teeth Than Non-Smokers