“You’re either with us, or against us” has been a popular quotation throughout history.  I think that phrase describes the water fluoridation debate fairly well.  There are many people against fluoride being added to their water, and many people that support the addition of fluoride to the public water supplies. 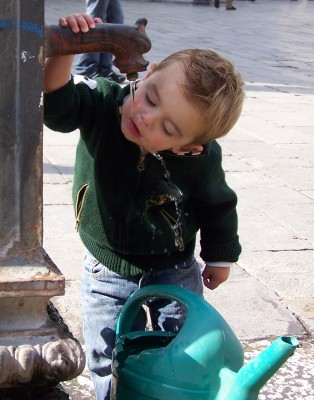 I’ve felt caught in the middle.  In my dental school we are bombarded with presentations on the benefits of water fluoridation and much of academia doesn’t seem to acknowledge that there are good arguments on both sides of the water fluoridation debate.

Today and tomorrow I’m going to try to give the best arguments for and against water fluoridation so that you can be more informed and decide which side you fit with.  Or, maybe this balanced view will leave you feeling much like me — stuck in the middle.

Water fluoridation prevents cavities — obviously, this is the main reason why fluoride is added to public water supplies.  Systematic reviews are considered near the top when it comes to reliable evidence because they comb through all of the studies on a certain topic, weed out the unreliable studies, and publish the combined results of the best studies.

In 2000, the British Medical Journal published a systematic review on the effectiveness of water fluoridation at reducing cavities.  The following sentence comes from their results:

“Water fluoridation was associated with an increased proportion of children without caries and a reduction in the number of teeth affected by caries.”

By drinking fluoridated water, you can incorporate fluoride into the enamel of your teeth.  When fluoride is present in your teeth, it makes them more resistant to being dissolved by acid.

Learn more about the three ways fluoride strengthens your teeth.

3 – Water Fluoridation Is Accessible to Everyone

Many people can’t afford to routinely go to the dentist for a checkup and cleaning — water fluoridation allows them to improve their oral health free of charge.  Fluoridated water helps both rich and poor alike.

The CDC has estimated that for every dollar invested in water fluoridation in communities of over 20,000 people, $38 in dental care is avoided.

Fluoride is naturally found in the water supply. Here’s a world map that shows where the water is naturally fluoridated at 1.5 PPM or above. Opponents of water fluoridation may argue that since water is fluoridated with a different type of fluoride, it’s hazardous. You can read more about that below.

Find out now: Is water fluoridated with toxic waste?

6 – The Fluoride Concentration Used In Public Water Supplies is Safe

Many opponents of water fluoridation claim that since fluoride is toxic in large quantities, we shouldn’t be adding poison to our water supply.  I would argue that most anything is toxic in excessive amounts.  Even water can kill you if you drink too much too quickly.  In small concentrations, fluoride is beneficial.

The Environmental Protection Agency sets maximum acceptable limits for many different substances that are in the water supply.  They have set the maximum limit for fluoride at 4.0 PPM.  A majority of fluoridated water contains fluoride at a concentration of 1.0 PPM.  That’s only ¼ of the allowable level.

7 – Water Fluoridation is Easy to Utilize

This study determined that depending on the community size and method of calculation used, water fluoridation costs between $0.46 and $3.44 per person every year.

That’s not much money considering that a filling can cost over $100 and a tooth that needs a root canal and crown can cost well over $1,000 to restore.

This is has sometimes been called the fluoridation halo effect and can be likened to the benefits of herd immunity that occurs with vaccinations.

“Fluoridation of drinking water began in 1945 and in 1999 reaches an estimated 144 million persons in the United States. Fluoridation safely and inexpensively benefits both children and adults by effectively preventing tooth decay, regardless of socioeconomic status or access to care. Fluoridation has played an important role in the reductions in tooth decay (40%-70% in children) and of tooth loss in adults (40%-60%.)”

If you want to learn more about the benefits of water fluoridation, here’s two great PDF brochures from the ADA and CDC and another helpful webpage.

I’d love to hear what you think about water fluoridation in the comments section below!

Do you think I left out any important reasons to support water fluoridation?  Do you disagree?