The Vipeholm Study was a study that dental researchers conducted on a group of mentally challenged residents of the Vipeholm Institution. 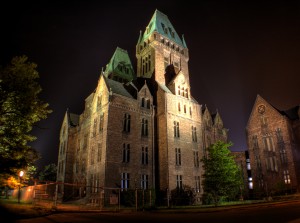 Dental researchers fed mentally handicapped people lots of sugar for the purpose of studying tooth decay.  Unfortunately, many of these patients ended up losing their teeth to cavities.

Although the study is tragic and wouldn’t be allowed to be done today due to ethics concerns, we learned a great deal about how foods cause cavities from this study.

The participants in the study were all fed the same basic diet.  The participants were divided up into seven groups to compare how subtle changes in the timing and quantity of sugar consumption affected their dental health.

There are three key groups in the Vipeholm study that helped us understand more about how food affects the formation of a cavity on a tooth:

1 – One group ate the original diet with an extra 300 grams of sugar dissolved in solution during their meals.  That’s the equivalent of drinking about five 20 fluid oz. bottles of coke per day during meals!

2 – Another group ate the basic diet with an extra 50 grams of sugar mixed into their bread that they ate during mealtime.

3 – The last group that we’ll talk about ate the basic diet.  However, in between meals, this group also ate snacks of sugary toffee and candy.

Which group ended up getting the most cavities and losing the most teeth?  The third group.

When the sugar was consumed in between meals, it gave the bacteria more opportunities throughout the day to form cavities on the teeth.

What We Learned from the Vipeholm Study

The takeaway message from the Vipeholm study was that the frequency of sugar consumption is more important than the amount of sugar consumed.  The study also showed that foods that stick around in the mouth longer have a greater potential to cause cavities.

2 – You chew on a piece of toffee with 5 grams of sugar for two minutes.

Which scenario do you think is more harmful for your teeth?

Chewing the toffee is more harmful for your teeth because it exposes them to sugar for a longer period of time, allowing the bacteria that ruin your teeth more time to wreak havoc.

To learn more about the bacteria that ruin your teeth, read What Every Human Needs to Know About Plaque.

Learn More About the Vipeholm Study

If you would like to learn more about the Vipeholm study, including reading about all seven groups and their results, there is a free paper you can read entitled The Vipeholm Dental Caries Study: recollections and reflections 50 years later.

If you have any questions or comments about the Vipeholm study, please feel free to leave them in the comments below.

Tooth Traditions from Around the World: It’s Not Just the Tooth Fairy!

How Often Should You Get Dental X-Rays Taken?