It’s common knowledge that smoking has many awful effects on your health.  Since I try to deal with oral health on this blog, I won’t go into all of the systemic health risks of smoking.  I’ll just talk a little bit about the oral health risks. 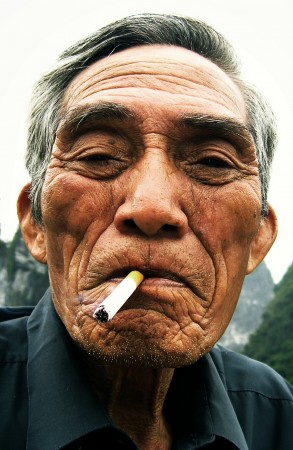 Smoking puts you at greater risk for oral cancer, such as lip, mouth, tongue, and throat cancers.  Smoking is strongly associated with gum disease, a leading cause of tooth loss.

Cosmetically, smoking can discolor your teeth (causing some smokers to fall for online teeth whitening scams) and cause bad breath.

What many people may not know is that smokers, on average, have less teeth than non-smokers.

Smokers Have Less Teeth, On Average, Than Non-Smokers

This study published in the April 2007 issue of the Journal of Dental Research looked at 43,112 male health professionals in the United States.  It found that those who smoke 5 to 14 cigarettes per day are two times more likely to lose teeth than a non-smoker.  People who smoke more than 45 cigarettes per day have three times the risk of losing teeth than a non-smoker.

An interesting conclusion of that study was that if you used to be a smoker, but hadn’t smoked in ten years, you still were 20% more likely to lose teeth than a non-smoker.  Quitting smoking can lower your risk of losing teeth to nearly that of a non-smoker.

Here’s a graph I created using the data from the NHANES study: 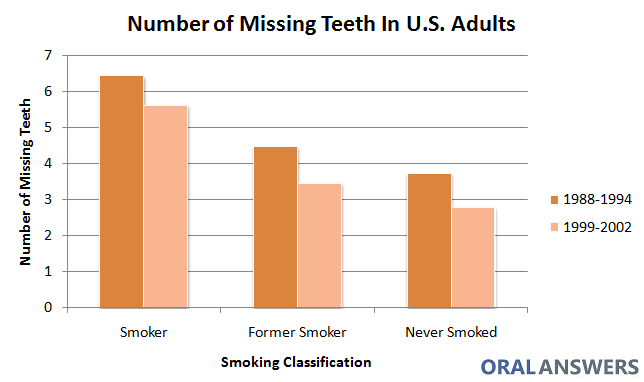 As shown above, smokers are missing more teeth.  Interestingly, people are keeping their teeth for longer, as shown by the lower numbers at the turn of the century as compared to the numbers from 1988 to 1994.

Why Do Smokers Have Less Teeth than Non-Smokers?

The reason that smokers have less teeth is probably due to multiple factors.  It could be an interaction with the chemicals or smoke from the cigarettes and the mouth.  Some say that because smoking decreases bone density in the whole body, it decreases the strength of the bone that holds the teeth into place, thus causing more smokers to lose teeth.

The National Health and Nutrition Examination Survey found that “[Adults with teeth] who were current smokers had a higher prevalence of untreated tooth decay (35.0%) than did those who never smoked (18.6%) and former smokers (17.7%).”

Perhaps those who smoke aren’t as concerned about taking care of their teeth.

What are your thoughts?  Please leave any comments and/or questions that you may have below in the comments section.  Also, if you know someone who might like this article, please don’t hesitate to share it with them.