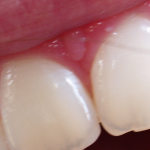 At What Age Does a Child Need a Frenectomy?