Home Oral Health & Hygiene Flossing In Public: Is It OK?

Did you know that about two months ago at a minor league baseball game in Lowell, Massachusetts an obscure dental world record was set?

Over 3,000 baseball fans simultaneously flossed.  Together.  In public.  In fact, you can see the happy faces of these world flossing record holders here.

Reading this story reminded me of an incident that happened a few months ago.  I was on a subway train riding home from dental school.  I couldn’t help but notice that the woman across from me was busy flossing her teeth.  Perhaps she had read this article on flossing mistakes and was trying to show the world what a good flosser she was, but I doubt it. 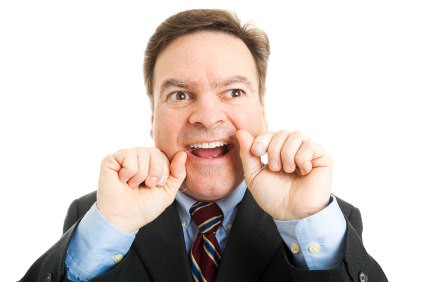 As a budding dental professional and a slight germophobe, I was torn.  On one hand, this woman seemed serious about taking care of her teeth and gums.  On the other hand, she was most likely flicking all kinds of bacteria and perhaps tiny pieces of her lunch on those around her and the inside of the subway car.

I can appreciate both sides of the debate regarding flossing in public.  Here’s a quick summary:

Why Flossing In Public is Not OK

In a recent letter to the American Dental Association, a dentist, Dr. Sigurds O. Krolls, said the following in regards to the world flossing record that was set at that Massachusetts baseball game mentioned above:

I looked in amazement at the photograph of the enthusiastic crowd in the Red Sox’s Single-A affiliate ballpark flossing their teeth. Just imagine all the viruses, bacteria, saliva released in the air! As for the food particles: spit out, removed from the floss with one’s fingers or, at best, swallowed.

And I would not be surprised that in their euphoric state, the flossing was followed by high-fives, handshakes or slaps on the back. No “saniwipes” noticed, but it would have been too late.

Dr. Krolls makes the point that we do have a lot of very small junk stuck in our teeth and it’s best not to remove it when you’re surrounded by other people.

Why Flossing In Public Is OK

There are also people who see no problem with flossing in public.  Some arguments that can be made in the public flossers’ favor are:

What Are Your Thoughts on Flossing in Public?

Most of the people I’ve talked to think that flossing is something that should be done in the privacy of your own home, or in a public bathroom if it needs to be done in public.

I tend to agree that flossing should be done outside of the public sphere since flossing in public can make those around you uncomfortable or even sick.

What do you think: Is flossing in public OK?

Can You Get a Cavity Under a Dental Crown?