Home Pediatric Dentistry At What Age Does a Child Need a Frenectomy?

One of the topics that I get emailed about most often is labial frenectomies.  Not long ago, my sister called me asking me whether or not her daughter should get a labial frenectomy.  The dentist had noticed it at one appointment and said that she may have a gap between her front teeth if a frenectomy wasn’t done.

My sister never got back to the dentist.  At the following appointment, the dentist never mentioned that her daughter needed a frenectomy.

Overall, it seems like orthodontists and general dentists are recommending frenectomies more and more often. Is there a sound reason for performing all of these recommended frenectomies?  Should little children get frenectomies to avoid possibly having a gap between their front permanent teeth?  I’ll answer these questions and more in the article below.

At What Age Does a Child Need a Labial Frenectomy?

A few months ago, I had a conversation via email with a reader who we’ll call Amy.  Her daughter was only 16 months old and the doctor that she went to recommended that her 16 month old daughter get a labial frenectomy.  Here’s what Amy wrote in one of her emails to me:

Our doctor told us that her gum needed to be cut at some point before her back teeth came in and before the permanent teeth came in to help with the space.  She has not had any problems with it before like pain or trouble talking. To make the story different to me, is that the doctor that did the surgery was a ear, nose and throat doctor. I always had a dentist do the work on me.

I am not sure if this has anything to do with it but we live in a very small town and area. I have talked to many people and they all acted like this was a common thing to do even on toddlers and infants. So I am a little confused with their responses and yours.

I found Amy’s email slightly troubling as I hadn’t ever heard of frenectomies being performed in such young children unless their frenum is so thick that they have trouble eating/speaking or it is causing them pain.

After combing through a few different textbooks, I found a few quotes that I think are worth sharing.  Dr. Pinkham’s book Pediatric Dentistry states the following (I put the important points in bold text – and FYI a diastema is a space between the front teeth):

“Recent trends justify significantly fewer maxillary labial frenectomies.  These procedures should only be performed after it has been shown that the frenum is a causative factor in maintaining a diastema between the maxillary central incisors.  This cannot be determined until after the permanent canines have erupted.  Therefore a maxillary labial frenectomy prior to the age of 11 or 12 is probably not indicated.”

The book Paediatric Dentistry, edited by Richard Welbury echoes Dr. Pinkham’s pediatric dentistry book.  It says, “Parents are often concerned about spacing of the upper incisors, and they can be reassured that it will often reduce as the permanent upper canines erupt…There is some disagreement about the role of frenectomy in the treatment of diastemata, but it is very rarely indicated in the mixed dentition stage and is probably best carried out during active orthodontic treatment.”

Both of these authoritative books in the field of pediatric dentistry agree that a frenectomy shouldn’t be done, except in rare circumstances, before a child is 11 years old. 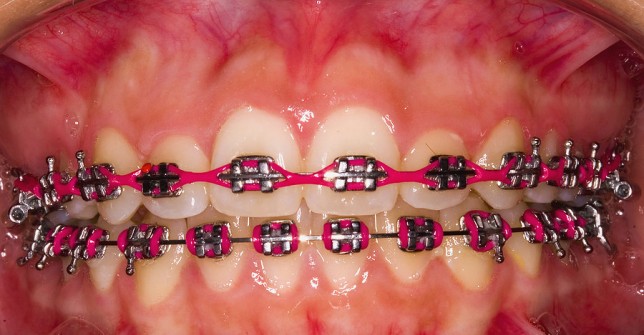 A labial frenectomy can be done after the gap between the front teeth is closed with braces.  To learn more about this topic, read the article Is a Labial Frenectomy Necessary After Braces?

When Should a Child Get a Frenectomy Before They are 11 Years Old?

There may be some situations where a frenectomy should be performed in a child who is younger than the 11 to 12 years old recommended above.

The book Carranza’s Clinical Periodontology says that “A frenum becomes a problem if the attachment is too close to the marginal gingiva.  Tension on the frenum may pull the gingival margin away from the tooth.  This condition may be conducive to plaque accumulation and inhibit proper toothbrushing.”

The book Pediatric Dentistry also states that if “the frenum attachment exerts a traumatic force on the facial attached gingiva of a permanent tooth (an uncommon situation)” then a frenectomy can also be performed.

Obviously, other valid reasons to perform a labial frenectomy earlier are if the frenum is causing the child pain or making it difficult to speak or eat.

To recap, a child should only get a frenectomy after the permanent canines have come in and after closing the gap between the front two teeth.  This means that a frenectomy should normally only be performed when a child has turned 11 or 12 years old.

A child may need to get a frenectomy earlier if the labial frenum:

I’d love to hear about your stories involving frenectomies in the comments section below.  Thanks for reading!